Serra Paragon{2}{W}{W}
Creature – Angel
3/4
Flying
Once during each of your turns, you may play a land from your graveyard or cast a permanent spell with mana value 3 or less from your graveyard. If you do, it gains “When this permanent is put into a graveyard from the battlefield, exile it and you gain 2 life.” 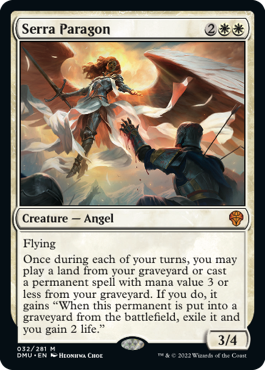 has caused quite a stir since its release in Dominaria United just a few weeks ago. The Comprehensive Rules, currently as written, do not allow this card to work as intended. This article will give you guidance on what the issue is as well as how to handle it in tournaments.

TL;DR Version: Allow the card to work as intended without breaking anything else.

Serra Paragon’s second ability is somewhat novel in terms of Magic card templating. It’s relatively uncommon to get a new way to play a spell, and those effects don’t usually attempt to grant an ability to that spell. Unfortunately, it’s just novel enough that the rules that should allow this to work don’t actually cover this situation.

When an object changes zones, it becomes a new object (CR 400.7). This means it forgets all continuous effects and has no relation to its previous existence. Clearly this can’t be a universal rule, as there are plenty of effects that attempt to track an object as it changes zones. As CR 400.7 points out, there are precisely nine exceptions to this rule (spoiler: Serra Paragon doesn’t fall under any of them).

What we would need is a rule outlining a tenth (and potentially eleventh!) exception to 400.7. The first would be something along these lines: “if a static ability allows a nonland card to be cast, other parts of that effect can find the new object that card becomes after it moves to the stack as a result of being cast this way, and an effect giving the permanent spell on the stack an ability continues to apply to the permanent that spell becomes.” This is similar to CR 400.7a and CR 400.7g, even though those existing rules do not currently allow this functionality. The second would be: “if an effect allows a land to be played, other parts of that effect can find that object.” This one is simpler because it just needs to slightly modify how CR 400.7h functions.

Currently, the rules-as-written will not allow Serra Paragon’s effect to grant the new triggered ability to the played card. In either case, whether playing a land or casting a spell, the lack of a proper exception to CR 400.7 means that the ability will lose track of the object once it moves to the battlefield, and as such it won’t be able to grant the ability. This is not working as intended.

is supposed to work. Wizards of the Coast wants it to work, we want it to work, and players want it to work. In short, let’s make it work. The Comprehensive Rules will be updated at some point, but in the meantime we should not be penalizing players because of a rules glitch.

When ruling on Serra Paragon situations, treat it as though the correct exceptions exist to allow the played land or cast spell to gain the appropriate exile-and-gain-life trigger. Further rules interactions should be handled normally; for example, if a player casts Ephemerate

on a Bear Cub

that was cast from the graveyard with Serra Paragon, then the “new” Bear Cub won’t have the Serra Paragon trigger anymore.

We have confirmed with Wizards of the Coast that this is how the card is intended to work and that judges should rule as such in tournaments.