We’re proud to announce the promotion of Travis Lauro from California to Level Three. Here are a few words that his friends and mentors had to say about him: 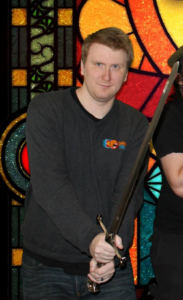 “Travis is quite the character. Personally, and I know this is true for other judges, too, he keeps me in check on my policy knowledge by constantly not being afraid to challenge my opinions and force discussion, even if it’s to come to the same conclusion we always have.

Travis has also been a great friend for many years, as well as a partner in crime for the many bits that we insist on committing to. I don’t think it would be fair to celebrate Travis without showing off our puzzle decklists from a team event we competed with Eliana Rabinowitz in in 2019.” 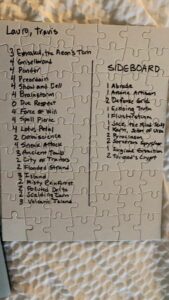 “Travis represents some of the best qualities of a Magic Judge – a tireless work ethic, a passion for mentorship, and a charismatic leadership style. He’s helped dozens of judges sharpen their investigations skills at a series of workshops he ran with Eliana. He was a one-man kickstart team at MTG Vegas 2021, launching events that served thousands of players. And he’s worked on some of the most prolific policy education projects, including the Knowledge Pool and the Missed Triggers Guide. It’s no surprise that Travis was recognized as an Exemplar by his peers 57 times.

But beyond his highlights, Travis has always been one of the most reliable and steadfast judges with whom I’ve worked at events. Travis doesn’t hesitate to give feedback up and down the chain of command, and he’s never balked at receiving feedback to improve his own skills. Head Judges regularly count on him to lead difficult teams, or to shadow new judges at their first large event. Travis has demonstrated at event after event that no matter where he is on the judge schedule, he can be counted upon to make that event better.”

Congratulations to Travis – the whole judge community recognizes your accomplishment and welcomes you into the program’s leadership.