Playtests, Proxies, and Counterfeits, Oh My!

Hello and welcome to today’s edition of Policy Wonks! Today we’ll be discussing a topic that is sure to become a lot more relevant as paper Magic events return: the various ways that unofficial cards are used to represent real Magic cards and the problems that may arise. We will cover situations that are harmless and situations that are extremely harmful. We will also discuss our role as judges when it comes to these “fake” cards.

These have probably the widest range of examples of any of the types of cards we will discuss today. Playtest cards are commonly used for just that – playtesting. If I’m working on a new Modern deck, I will likely create playtest cards so that I can play some games with the deck before spending money on new cards. They can range from a basic land with the word “Fury” written on it in Sharpie to a custom Mox Emerald painted by an artist. 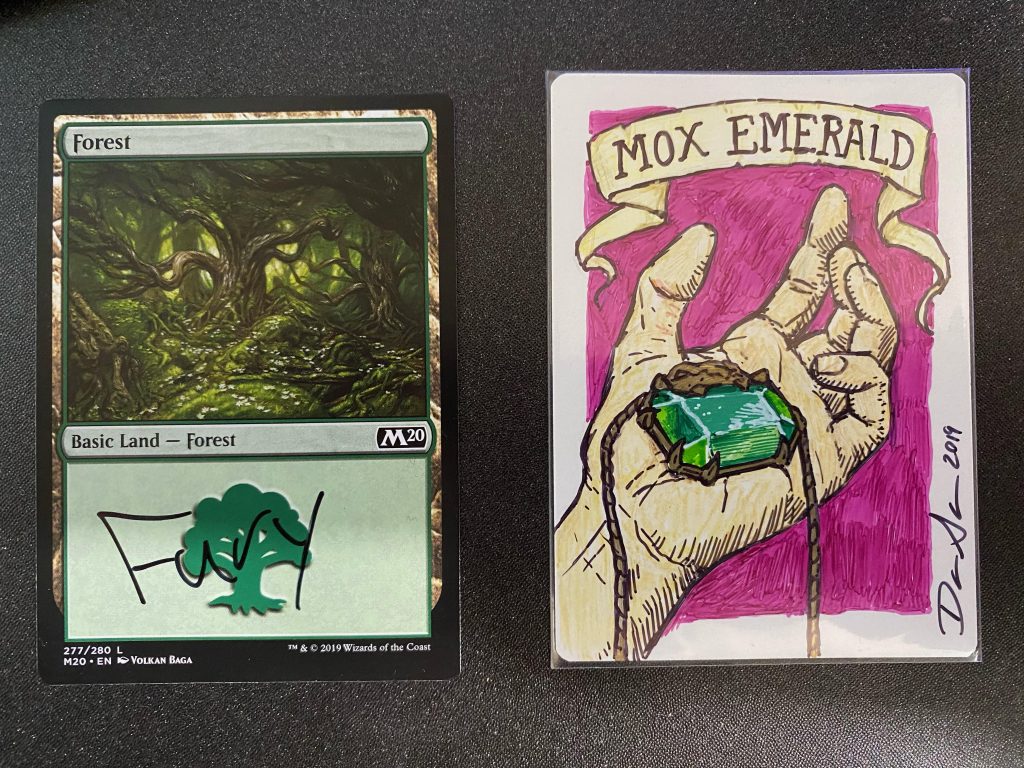 Playtest cards cannot be used in sanctioned Magic tournaments. They are only meant as a “training” or “practice” tool to be used outside of tournament play. Any players that are using playtest cards in place of real Magic cards in a sanctioned tournament needs to replace them with the correct card or a basic land of their choice, in accordance with the JAR or IPG.

This is a specific type of playtest card that has more baggage than a Sharpie’d basic land. There are ways to print out pictures of real Magic cards that can then be modified to make a playable deck. These are still playtest cards, but they should be discouraged as the artwork and design for the cards are both copyrighted. As judges, it is not our job to police these things. That said, in my experience, many folks that are engaging in this practice are simply unaware of the potential harms it can cause and informing them could prompt them to change their behavior.

NOTE: The “playtest cards” included in the Mystery Booster – Convention Edition booster packs are a different thing entirely and are not relevant to this discussion.

Often, the printed playtest cards are erroneously called “proxy cards,” but “proxy” has a very specific meaning in the Magic tournament documents. Neither type 1 nor 1.5 cards can be used in place of a real Magic card in a sanctioned tournament, but an authorized proxy can. When a card is damaged in the course of play in a sanctioned tournament or the card is foil and no non-foil printing exists, the Head Judge may at their own discretion issue a proxy for that card. That proxy is only good for that specific card and only for the duration of that specific tournament. The vast majority of cards referred to as “proxies” by players are in fact playtest cards, not officially authorized proxies.

Part of the trouble with the type 1.5 cards is that they are attempting to look a lot like real Magic cards. I’ve seen a significant number of these in my time, and thankfully they do not take long to suss out as being different from a real Magic card. However, some less-than-reputable sources have taken to going to great lengths to duplicate cards to a reasonable degree of accuracy – these are counterfeits and easily the most damaging of the types of cards discussed today. The biggest difference between counterfeits and the other fake cards is that counterfeits attempt to pass themselves off as the real thing. There are many resources across the Internet for how to spot counterfeit Magic cards and it would behoove judges to familiarize themselves with some of the more egregious signs. Keep in mind that you should *never* risk damage to someone else’s property in the course of your duties as a judge. When at larger events, knowing or familiarizing yourself with some of the higher-end card vendors can be a useful resource as well, as they tend to have experience spotting fakes. It may seem like counterfeits are more likely to appear at Vintage and Legacy tournaments due to the sometimes-extreme value of some of the cards there, but even Standard cards are counterfeited due to the decreased scrutiny they tend to be under. These fakes are damaging to the long-term health of Magic and should be remedied whenever discovered. We should *not* be confiscating them, but we must bring the player’s attention to the issue and address the fake card within the scope of the MTR, IPG, and JAR. For tournament policy purposes, these are treated the same as playtest cards with one significant exception. If the player knew that the card was counterfeit and used it anyway, then the penalty is Cheating, and the player should be Disqualified from the tournament.

Players are responsible for obtaining real Magic cards for use in sanctioned tournaments. The requirements for what constitute Authorized Cards are found in section 3.3 of the Magic Tournament Rules. Our specific response to each scenario will greatly depend on the specific situation. Hopefully today’s discussion has outlined the various possibilities you can expect and how our response should vary accordingly.

For more information, there is an article on the official Magic website that covers the same topic:
https://magic.wizards.com/en/articles/archive/news/proxies-policy-and-communication-2016-01-14