Welcome to today’s edition of The Rulebook! We’re going to continue our multiplayer focus as the CommandFest events grow ever closer. Today, we’re specifically looking at the following multiplayer-relevant combat mechanics: Dethrone, Goad, Myriad, and Encore. Let’s dive in! 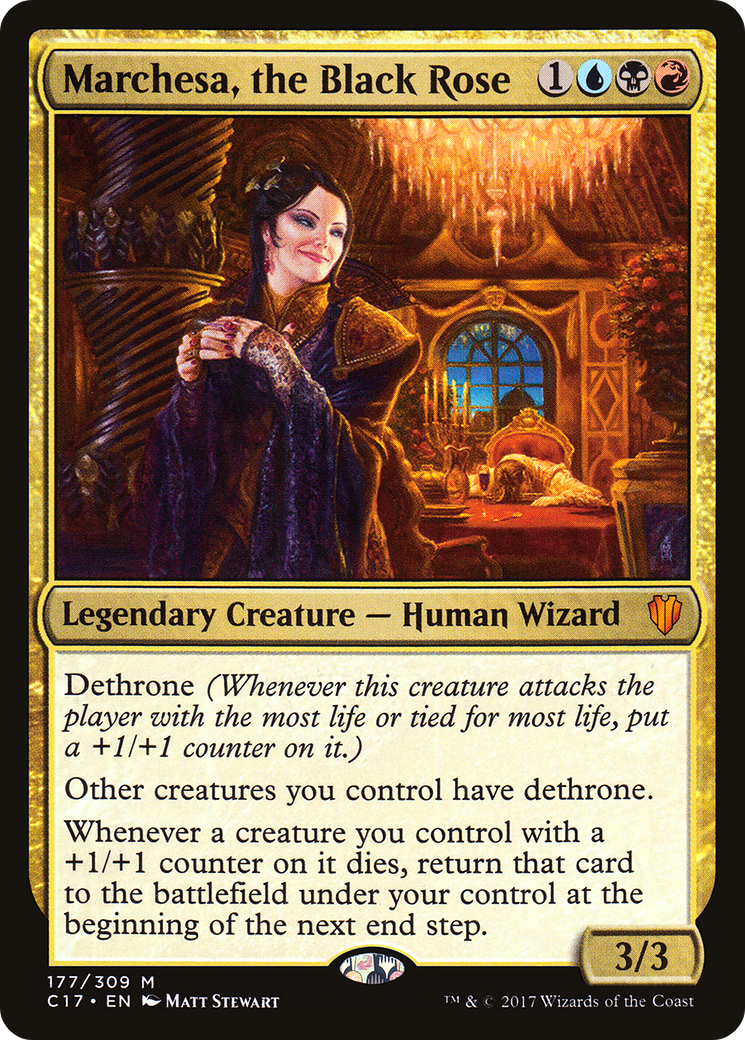 While the Dethrone mechanic itself is not terribly complicated, it demonstrates a shift in thinking that needs to happen when moving from two-player to multiplayer. Dethrone says “Whenever this creature attacks the player with the most life or tied for the most life, put a +1/+1 counter on this creature.” (702.105a). Otherwise-simple interactions become more involved when considering multiplayer games. In a two-player game, two out of three possible situations will qualify for a Dethrone trigger (both players tied, defending player has higher life, or attacking player has higher life). In a four-player game, however, the possibilities increase exponentially. Take a moment to make sure you see the whole game state when it comes to answering rules questions in a multiplayer game. It’s very easy to see that the defending player is tied with another player in life total while missing that a third player has the actual highest life total at the table, which could result in an erroneous +1/+1 counter. Take your time, see the whole board. 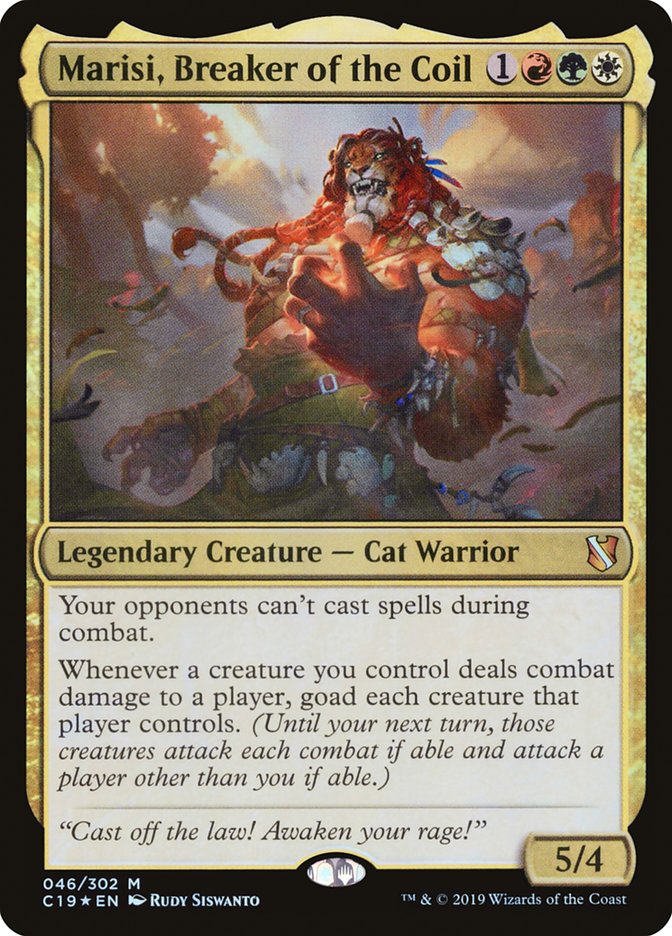 Goad is an interesting mechanic that touches on an aspect of the rules that doesn’t get talked about or explored quite enough: combat requirements and restrictions. “A goaded creature attacks each combat if able and attacks a player other than the controller of the permanent, spell, or ability that caused it to be goaded if able.” (701.38b). These are both combat requirements and are governed by CR 508.1d. The important difference between a restriction (like Pacifism

’s effect) and a requirement is that a restriction cannot be violated, but a requirement can be (note the text “if able”). Here are a few examples using Goad:

’s “enchanted creature can’t attack” effect is a restriction, so neither of the Goad requirements can be satisfied. Bear Cub

can legally attack Player D without violating any of its Goad requirements, so Bear Cub

Players C and D have left the game. Player A plays Psychic Impetus

now has two requirements, but it is impossible to fulfill both as Player A is the only potential defending player left in the game. Not attacking, however, would violate both requirements. The rules dictate that the attack violate the fewest requirements possible, so Player B must attack Player A with the Bear Cub

, as that only violates one requirement instead of two. 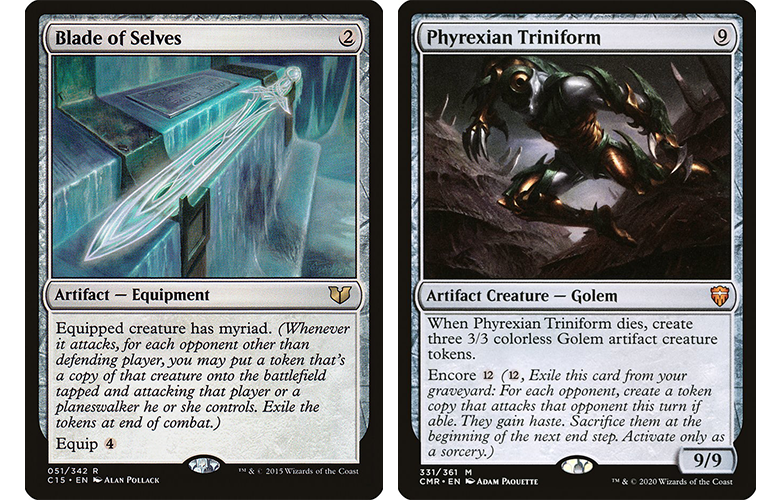 These two abilities are very effective at making multiple enemies. Myriad (702.116) is an ability that copies the creature it’s on, sending the copies each attacking a different player. Encore (702.141) is similar, except it exiles a creature out of the graveyard and makes copies for a single attack at every opponent. In each case, the token copies don’t survive the turn. Myriad exiles the tokens at end of combat while Encore sacrifices the tokens at the end step.

An important thing to remember about Myriad is that the creature token copies are created already attacking, so they will not trigger abilities that trigger on creatures attacking. For example, they won’t re-trigger their own Myriad abilities. Also, as mentioned above, the tokens are directly exiled at the end of combat. They won’t trigger abilities that trigger when creatures die. The delayed triggered ability that exiles the tokens is only a single trigger regardless of how many tokens are created, in case you’re looking for a Trickbind

The experience of Encore is different from Myriad in some key ways. Encore does not create attacking tokens, for example. Instead, Encore must be activated only at sorcery speed, and will create tokens with an attacking requirement and haste. Each token will have a slightly different requirement as each one is pointed at a different opponent. This could matter significantly when players try to remove these tokens before your combat phase. Goad has an interestingly odd interaction with Encore. Let’s say Player A activates the Encore ability of their Impulsive Pilferer

. They will make three tokens, one for each of their opponents: Players B, C, and D. Player B doesn’t want to be attacked by this 1/1, so Player B activates their Evolving Wilds

and finds a Mountain, which triggers their Geode Rager

. Player B targets Player A with the Landfall trigger. Now, all of Player A’s tokens are goaded by Player B. For the tokens attacking Players C and D, this doesn’t do much. However, the must-attack-Player-B token is a more complicated matter. It is affected by three combat requirements: it must attack if able (Goad), it must attack Player B if able (Encore), and it must attack a player other than Player B if able (Goad again). These last two are mutually exclusive, so it’s impossible to satisfy both. As with the earlier Goad examples, the token does have to attack. In this case, though, Player A can choose which of the other two requirements to satisfy. In either case, two requirements are satisfied and it’s impossible to satisfy all three, so the rule will allow either choice (508.1d). Player B’s plan was perhaps not the most well-thought-out.

Thank you for joining me on this journey through some multiplayer combat! I hope this gives you some more preparation if you’re headed out to judge some multiplayer Magic. Are you heading to a CommandFest event? Did you find a weird multiplayer-combat corner case? Continue the conversation on the Judge Academy Discord server!