Last week, Wizards of the Coast rolled out their Premier Play program for the upcoming 2022-2023 season. There are many details and takeaways from that announcement, but one in particular for judges to notice is the prominence of Pioneer as a competitive format. In light of this, today we will take a look at some of the more complicated rules interactions that come up with one of the format’s more convoluted decks: Lotus Field Combo.

Lotus Field Combo decks will have a variety of win conditions, but their engines are all based around using Hidden Strings and Pore Over the Pages to generate mana and card draw through tapping and untapping Lotus Field. Arboreal Grazer and Sylvan Scrying help accelerate land drops and find the key lands in the deck, while Thespian’s Stage gives access to Lotus Field copies without that pesky enters-the-battlefield trigger. Many decks choose to use Omniscience to cement their mana advantage, then use Approach of the Second Sun as a minimally interactive win condition.

The game plan for this deck certainly has many moving parts and it is a challenge to play optimally, but so far none of these interactions are particularly difficult from a rules perspective. We will take a look at a few of the more difficult ones that come up, especially when opponents attempt to interact with the deck’s combo plan.

Interaction 1: Pore Over the Pages, Lotus Field, any two other lands 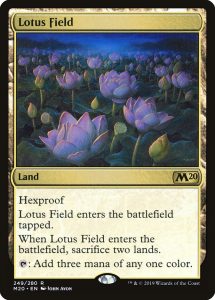 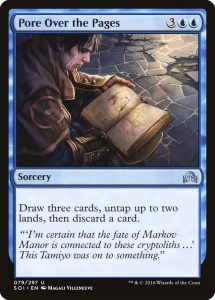 It may seem like this is one of the core interactions of the deck, but there is a subtlety that is not immediately obvious. Let’s say for simplicity that the other two lands are a Forest and an Island. You can use Forest, Island, and Lotus Field to cast Pore Over the Pages. One of the big choices that the deck’s pilot must make is which pair of lands to untap with Pore Over the Pages’s effect. Notice how the instructions are ordered: “Draw three cards, untap up to two lands, then discard a card.” This means that, vitally, the Lotus Field player is allowed to look at the three drawn cards before choosing which lands to untap (608.2c, 608.2d). This could make the difference between having the correct colored mana to continue the combo or being stuck on the wrong lands. 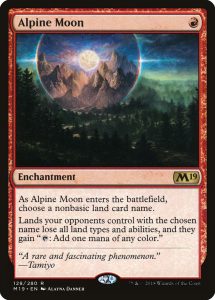 This interaction will come up a lot due to Alpine Moon’s popularity in Pioneer sideboards. There are two scenarios to consider: whether Alpine Moon is cast before Lotus Field is played or after. 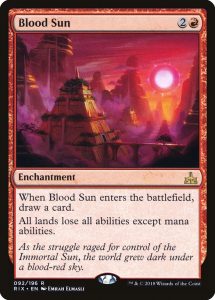 Blood Sun is an interesting case as it is nearly identical to the Alpine Moon interaction, but with a key difference. Blood Sun doesn’t remove mana abilities. “T: Add three mana of any one color” is a mana ability (605.1a). Since that’s the most desirable of Lotus Field’s four abilities, there is a case to be made that Lotus Field decks could run their own Blood Suns just to dodge the two big drawbacks of Lotus Field. The counterargument, of course, is that Blood Sun also turns off Thespian’s Stage’s copying ability, so that’s probably why this super hot tech hasn’t caught on anywhere.

Thank you for joining me for this edition of The Rulebook! I expect we’ll be hearing a lot more about Pioneer as the 2022-2023 Premier Play season starts to heat up. What decks are you looking forward to playing? Are there any rules interactions you’re particularly wary of? Continue the conversation on the Judge Academy Discord server!