Who Is This Guy?

Howdy folks – this article is intended to be an introduction to myself and the role of the Warrior (Logistics) Champion. I’m Jonah Kellman and I’ve been playing Magic since the Fall of 2001 and wanted to be a judge since I discovered a few years later that they “pretty much made up the rules” according to someone at my LGS. It took about a decade after that to actually become certified on Halloween, 2014. I quickly realized that I did not have ultimate power. Since then, I’ve done a lot of judging and a lot of traveling for judging. I’ve been the head judge for everything from eight-player FNMs through PPTQs, PTQs, NRG series, SCG Classics, and Opens, and a 25th Anniversary Beta Draft. I’ve worked events like Eternal Weekend and Eternal Extravaganza, dozens upon dozens of Grand Prix, conventions like HasCon and Gencon, and more. I’ve also been Sides Lead more times than I can count (which means at least three times, but probably more). In 2019 I traveled for events over forty weekends out of the year and spent an average of one day every week at my local airport. Beyond that, I managed content development for Mystical Tutor, an online judge education platform, and was a part of Planar Bridge, a project that strove to improve communication between judges and leadership of the former judge program.

The most powerful moments in judging, for me, come from working as part of a team to overcome challenges. Sometimes they’re policy or rules, and sometimes it’s working with an individual for them to overcome personal challenges (either them helping me or me helping them) but the most consistent thing is logistical challenges. So frequently it’s not just one person, but four or ten or twenty… GP Memphis, where we moved the entire GP from one hall to another, to avoid jackhammers. GP DC when the power went out and we were pairings boards, and lights, and helped manage everything by hand. Less dramatic things – the chaos of running sides at GenCon and dealing with cupcakes, or unified deck checks, or just my first checks lead? Endless dynamic challenges, and always with new circumstances or people. The rules are the same every time, and people are never finished, so you don’t get that satisfaction of winning. That’s why I like logistics – because there are always new questions and because I can win.

But that’s waaaaaaaaaaay more than enough about me. Let’s talk about you! Who are you? Well, you’re the reader of this article, and potentially a part of the group that I’m here to serve. As logistics champion, my focus is those judges who dig events the same way I do. I mean, yeah, all of judging is great, and no shade to any of the other champions, but c’mon, logistics is the best. Having the venue prepare some tables for more side events only to discover they put one chair at each table? That’s a memory that is going to stick. Are you the sort of person who is at a busy restaurant and thinks “Oh, their floor coverage seems poor. Maybe if they…”?

Most people don’t get into judging because of the logistics – I mean, sure, sometimes there’s an event where things go off the rails enough that you notice as a player and want to get fix the problem, but judges are known for their rules and policy and the position is often recognized as one that can have a significant impact on your local community. It’s more frequent that somebody becomes a judge because of those things, and that’s fantastic – we have so much support for that with all of the content coming from Wizard, Paladin, and Bard.

But that’s often working from the ground up. Judges who are interested in logistics, in those small optimizations – you’ve been around long enough to already know all of the simple fixes. You are the LGS hero – launch two drafts, modern, legacy, standard, pauper, and pioneer, while wrangling the herd of cats that are your EDH players, and while helping schedule your store’s back to back prereleases. You are the judge who has worked dozens if not hundreds of tournaments with more players than you can count. You have team-led. You have developed new processes to make scheduled events or on-demands or deck checks or end of round or one of so many things work just a little bit smoother. Maybe you write tournament reports, either for yourself or for the public, talking about what you did well, what others did well, and how you can improve. You find yourself in positions of authority at larger events, because people know that when things go wrong, well, you’ve gone wrong before and you know how to fix it.

So, right now, what does Judge Academy offer you? We offer modules that can help you advance to competitive events and large team events, sharpen your rules and policy knowledge, but our modules on logistics dry up pretty quickly, and those that do exist often focus on explicit examples.

Of course, as mentioned before, logistics aren’t always the same – explicit examples lose their value quickly, and we can’t teach you everything that might happen. Logistics is about triage and problem-solving, frequently under a time constraint. The practical skills required for good logistics are most commonly hands-on skills. Instructions on how to perform a deck check, or how to optimize body language on a judge call, how to cut slips – all of these things are so much easier to learn when you simply get to do them.

Learning happens best at events. This has long been recognized as true, and unfortunately, having large, multi-judge events just hasn’t been feasible recently. Even then, with large events, with a staff of thirty judges, you only have one head judge, one or two appeals judges, and six or seven team leads, and a lot of those roles go to the judges who already have the experience, not those who are trying things for the first time.

While I (and JA) won’t personally be running any events any time soon ourselves, we can provide tools and experiences that can simulate events and sharpen you for when you return to the floor. We plan to take advantage of real event spaces and real event disasters to guide you in the right direction.

So what’s coming down the pipeline? Well, there’s a lot. This month we’re releasing our first of many new modules – this one will cover teaching basic tournament best practices. It’s been a long time since any of us have worked a serious number of large events, and there are many new judges who have very little practical experience. This module will talk about the things that have become an innate reflex in some judges that you would normally pick up through osmosis and working many events. The module provides guidelines on how to best support other judges and streamlines some of the best practices into something that can be taught as we return in force.

Of course, we will also be updating old modules, making them more consistent and sharp in language and presentation. The first things you’ll see updated from me are the existing level one modules, followed up by level two and level three modules. Sprinkled throughout, I’ll also be producing new modules for all levels – primarily electives and not required content. Those will be supplemented by regular articles (in some ways like this one), but most frequently related to the newest content we’ve released.

I also have plans for a variety of logistics-oriented tools. Some will be simple, like a collection of basic checklists you can utilize for various tasks, like head judging a pre-release or team leading end of round. Others may be more complex – one goal is a data reporting tool for head judges of multi-judge competitive events, tracking appeals, investigations, and other notable events, to share data with other judges, and to note potential patterns, particularly in appeals.

Beyond that, we want to provide the tools and structures for experiences like Judge Calls Live and Investigations Workshops to be available for judges who would enjoy them and stand to benefit. There are also plans for more intense event simulation experiences that would be run at live tournaments, pushing more towards live training than hypothetical.

Finally, there are plans for a variety of games (or experiences, or events, or whatever you want to call them) including Judge Olympics (NOT match slip cutting races – that ends poorly), staffing and scheduling Games, and possibly creating digital representations of actual tournament spaces to play around in a sandbox and see what can happen to an event if everything is structured poorly.

Now, I’ll continue to say this about logistics, but the above isn’t a comprehensive list of what I plan to provide, but ideally, you now have an idea of what will come to you over the next few months. Furthermore, as the title of this blog suggests, while there is a significant focus on strategy, sometimes you have to be prepared to throw it out the window and improvise on the fly. As always, if you have any ideas, questions, comments, or concerns, please feel free to reach out to me either over Discord or Questions@JudgeAcademy.com 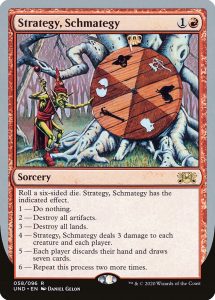