In Judge Academy’s recent December update, the new Champions were revealed! Thank you so much to all who applied, and a big congratulations to those who were selected. The competition was certainly fierce. After a marathon of really great interviews, a few judges stood out as being particularly equipped to face the challenges of these specific positions. “Who are the Champions and what exactly will they be doing for Magic judges?” you may ask. Let’s hear it from the Champions themselves as they settle into their new roles: 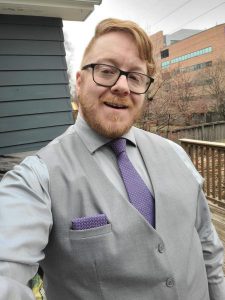 As Community Bard, Matthew is excited to live out their dream of cooking a meal for every judge around the world. They bring 20+ years of experience as a community organizer to the role, along with a passion for prereleases, charity events, conferences, judge dinners, and all the ways judges can foster community among themselves and other Magic players. They can often be found cooking, hosting a draft night, or roping other judges into being a guest on their podcasts. As someone who takes the title Community Bard quite literally, they will gladly drop everything else to join other judges at Karaoke.

Favorite Magic Card
Counterspell.  Why do a thing, when you can stop someone else from doing a thing?
Favorite Community Building Activity
Karaoke nights and charity tournaments
Favorite Game (Other Than Magic)
Vampire the Masquerade
Share a Fun Judge Story
I arrived in Japan a few days early to do some tourism before the Magic Fest I was working, and my wheelchair broke. I needed to get it fixed but, not speaking Japanese, was having great trouble finding a store or technician who could help me. As a long shot, I posted about it on the forum for the event. A local judge I had never met before contacted me, heard what I needed, made some calls and arranged for someone to come to my hotel. This judge took time out of their day to come at the same time and act as translator. Someone I’d never met went above and beyond to help make my trip, and my time as a judge, so much easier. To me, that was such a great example of the kind of connections and community that judging creates, literally around the world.
Plug Your Favorite Local Game Store
I moved to the Twin Cities shortly before Covid broke out, so I haven’t had a chance to really build that connection, but I’m excited to do so! I’m Board in Madison, WI., where I worked and ran magic for a while, will always be a favorite of mine. 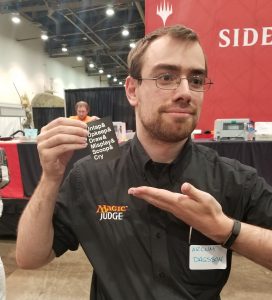 As Event Warrior Champion, Jonah spends roughly the same amount of time in airports, hotels, and convention centers as he does in his own home. Drawn to dynamic challenges, he appreciates how every event has its own logistical hurdles and no plan is perfect. If you catch him during his downtime, he is more than willing to talk to you about books, Star Wars, or Star Wars books.

Favorite Magic Card
A foil Shaper Apprentice that I got the same day I had some conversations with Toby Elliott that eventually did help shape tournament policy.
OR
Jodah, Archmage Eternal because I loved his character in the books, in no small part because of the overlap in our names, and he’s a 5c good stuff commander?
Favorite Airport
Oh boy. This is like “favorite place to have a blister”. I’m used to Boston Logan, and Bradley International is my home airport, and I like it because it’s relatively small, so I don’t have to walk very far to get to my flight.
Favorite Large Event Venue
Columbus? New Jersey maybe? Richmond? I’m really picking venues that have good food nearby and hotels across the street. Columbus is probably the choice I think?
Share a Fun Judge Story
I think one of my favorite memories was working as Kickstart lead at a MagicFest in Toronto. I had to renumber two rows for a two-headed giant event and roped in Eric Dustin Brown (former L3, RC and logistics master). It took the two of us maybe… four? Five? Attempts to renumber the rows correctly. We were trying our hardest, but just… struggling so much with a task we both knew how to do.
Favorite Question to Ask New Judge Candidates
We’re playing a game of magic. On the first turn of the game, I play a basic Forest and say “go”. How many times are state-based actions checked? This is not a question a player would ever ask (or if they do, I have many questions for them), but it shows an understanding of turn structure (and exceptions), basics of SBAs and a little bit of priority and shortcuts…
Plus it’s one of those wacky questions that doesn’t seem to make sense, like, “Assume that you’re five feet, six inches tall on a beach at the equator. You’re casting a shadow that’s seven feet, eight inches long. What time is it?” 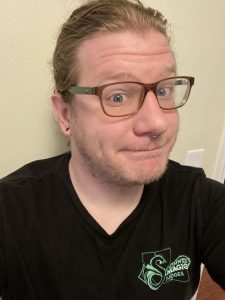 Thomas, most likely a Warlock of the Coffee Patron and agonizing over the last cut to a draft deck, brings to the table a commitment to education, seeking to ensure personal development and helps to promote a community that utilizes creativity and innovation. He gets easily excited at all the opportunities to be challenged.

Favorite Magic Card
Lightning Bolt
Favorite Tournament Format to Run
Legacy
Best Customer Service Advice
De-escalation and a bit of empathy goes a long way when working with others.
Share a Funny Judge Story
<redacted>
Plug Your Favorite LGS
My home was Eudemonia which closed during quarantine so I am now a wandering Bay Area judge 😀 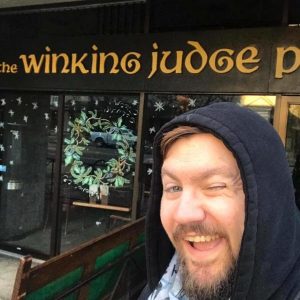 Daniel, owing to his experience as an educator, is in charge of Rules and Policy content. He is passionate about travel and new experiences, so you will probably find him in an airport somewhere. He’s been a judge for over 15 years (yes, really, 15 years) and has seen many ideas have their time in the sun. If someone is playing Storm, Daniel’s probably not far away.

Favorite Magic Card
Battle of Wits – I really enjoy cards that mess with the fundamentals of the game as well as cards that say “win the game” on them. This is the best of both worlds!
Favorite Infraction
Hidden Card Error – When HCE was first introduced, it represented a fundamental shift in the realm of what we allowed policy to do. While the infraction is still complex and has room for improvement, I believe that the HCE experiment was a resounding success.
Favorite Layer
Layer 4: Types (closely followed by Layer 6: Abilities) – These two come up very often in complicated rules questions. My favorite rules question involves Taiga, Life and Limb, Blood Moon, and a Saproling token. This question takes place entirely in Layer 4, so it’s no wonder why I’m so comfortable there!
Share a Fun Judge Story
It is common for a large-tournament TO to give out booster packs of the most relevant set for drafting during the after-event staff party. For Grand Prix Oklahoma City in late 2017, that set was Unstable. It was one of the silliest staff parties I’ve ever been to!
Favorite Question to Ask New Judge Candidates
When discussing SBAs, I like to ask what happens if an Arcbound Worker blocks a Glistener Elf. Does the player get to move a counter via Modular or not?
Plug Your Favorite Local Game Store
Emerald Knights, Burbank, CA. Clean store, good selection of board games and comics, lots of space, and kind staff. 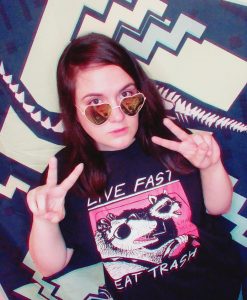 Samantha grew up in East Tennessee, went to college in Georgia, lived in California for a brief moment, made a home in Virginia, and then recently got stolen away to Florida. Samma found her way into the Magic community by first becoming a tournament organizer and then learning how to play Magic, (which is kinda backwards but she is doing her best.) Originally hired by Judge Academy to assist with creative projects, Samma’s professional background in both fashion design and digital marketing made her a natural choice to take on the Communications Champion role in addition to her continuing creative work. Her favorite hobby outside of Magic is watching/discussing/blogging about pre-2000 anime.

Favorite Magic Card
Lightning Bolt and Thoughtseize are my favorites functionally, although Ebon Praetor has my favorite art.
Favorite Social Media Platform
Twitter
Favorite Products to Design
Anything wearable
Share a Fun Judge Story
One time I drove from Washington DC to Halifax, Nova Scotia for a judge conference because I wanted to visit friends and see more of Canada. I love a good road trip.
Favorite Question to Ask New Judge Candidates
“If I asked the people in your local community about you, what would they tell me?” For some reason this question causes people to immediately start spilling their guts and all their dark secrets if they have any. I have no idea why.
Plug Your Favorite Local Game Store
One from each of the places I’ve actually lived during my judge life. If you’re ever in these cities, check out the following shops:
Washington DC: Victory Comics
Richmond, VA: Battlegrounds
Tampa, FL: Cool Stuff Games – Tampa